The rupee fell by 14 paise to 75.16 against the dollar amid selling in equities

Shiba Inu was founded in 2020 by an anonymous person named Ryoshi.

New Delhi: The Shiba Inu hit a record high over the weekend and became the 11th largest cryptocurrency by market cap.

A petition on Change.org asking Robinhood to list SHIB on its platform has garnered nearly 300,000 signatures. The token has grown by over 40 million percent in the past year.

“Memes have value and will be an investable thesis in 2021,” Jonathan Cheesman, head of over-the-counter and institutional sales at crypto-derivatives exchange FTX, said in an email on Sunday. “Low dollar-denominated tokens are attractive to retail” as investors can still buy more than 20,000 SHIBs for $1, he said.

The SHIB ecosystem has also dropped several non-fungible tokens, or NFTs, and a page for them says they are currently sold out, though it promises other packs are coming soon.

Vijay Iyer, head of Asia-Pacific with crypto exchange Luno Pte, said in a message on Sunday, “It is difficult to speculate completely honestly on the real causes of price movements with such Memecoin.” But “some interesting communities are being built around them.” 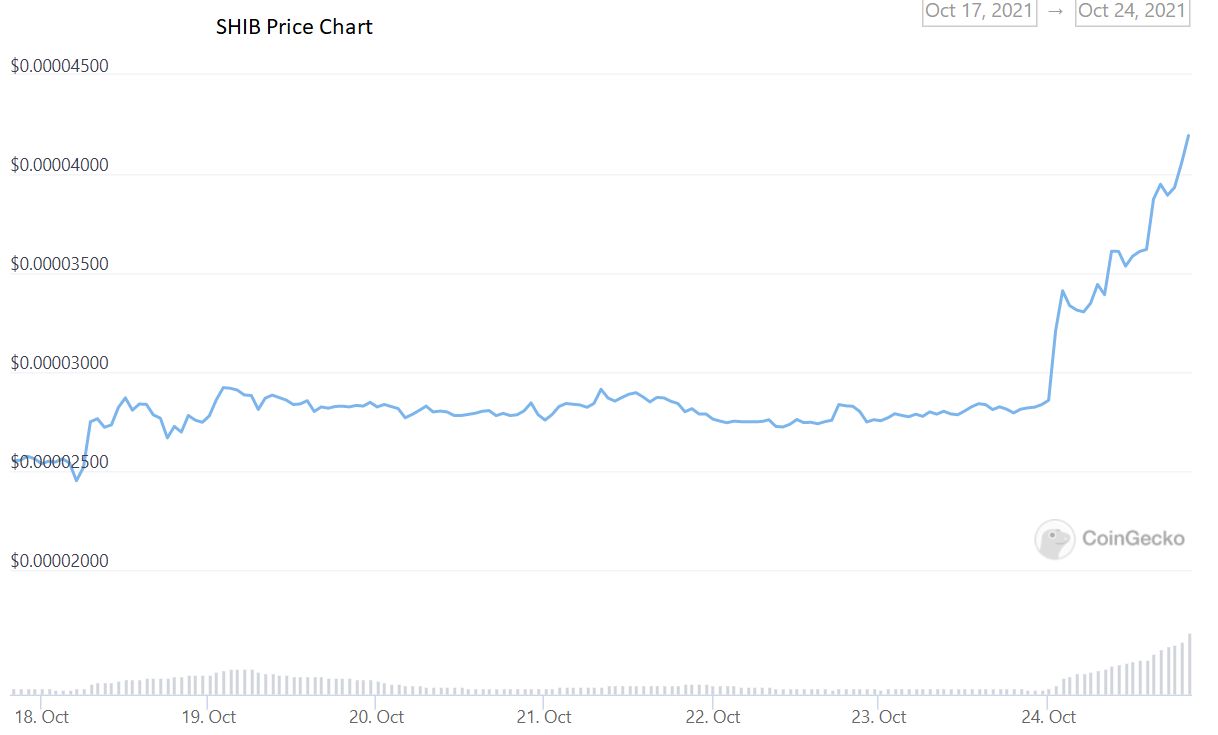 History shows that caution can be exercised.

The head of research and strategy at cryptocurrency exchange AAX, Ben Caslin, said in a message on Sunday that “the focus is on SHIB at the moment” and speculation is the primary driver of the price increase. Earlier patterns and dynamics in crypto indicate that SHIB could be “challenged by other projects and greatly reduce its value along with market cycles”, he added.

Shiba Inu was founded in 2020 by an anonymous person named Ryoshi, and Coin’s website refers to it as “a decentralized meme token that has grown into a vibrant ecosystem.”

It appears to be built in the vein of Dogecoin, a cryptocurrency that was created as a joke in 2013, and also has a Shiba Inu theme modeled after a Japanese dog breed. Dogecoin has since become a popular token used by some sports teams, AMC theaters, and others for payments.

According to CoinGecko, Dogecoin has also gained momentum in the last 24 hours. Its market value is around $34 billion, while that of the Shiba Inu is around $21 billion. Both can be quite volatile.