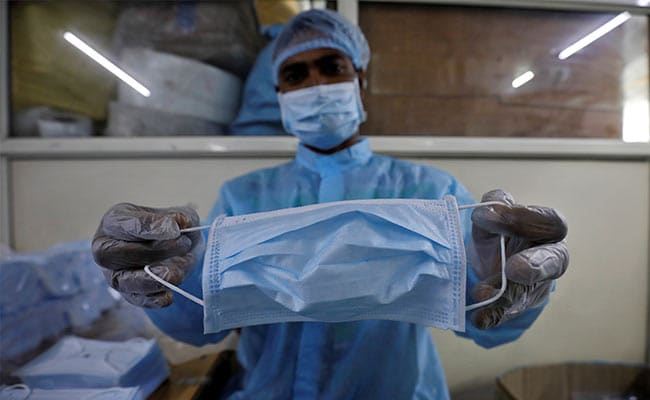 Thousands of brand-new coronovirus-safe face masks made by an Indian-origin surgeon and their UK-based collaborator, free of charge at state-funded National Health Service (NHS) clinics to prevent patients from accidentally spreading COVID-19 Are being introduced. , Nose and throat (ENT) medics.

Dr. Ajit George, who is based at Royal Stoke University Hospital in Stoke-on-Trent, created the SNAP device with fellow ENT surgeon Chris Coulson as a practical response to the COVID-19 crisis.

His brainchild was then developed over a few months in collaboration with engineers from Aston University and UK-based construction firms.

“It’s incredibly exciting to see this device from concept to reality so quickly,” George said.

“As surgeons, our innovation work is driven by creating the things we want to use ourselves. COVID-19 has raised awareness about the spread of the disease in the clinical environment, so we can be more practical during epidemics. SNAP devices are seen in applications. Beyond, “she said.

The SNAP device – consisting of a two-part valve and speculum – clips on either side of a standard surgical face mask, creating a hole for an endoscope and for patients to keep their nose and mouth fully covered.

Upon return of the endoscope, the one-way valve closes the hole. During the process, any cough, splatter, or sneeze are captured within the mask, which is eventually dealt with.

EST surgeons perform nassendoscopy, where a small flexible tube fitted with a camera is inserted into the nose, causing the risk of coronovirus shrinking as this procedure can cause patients to cough and sneeze. Until now, patients have had to remove their own facial masks for the endoscope, with surgeons relying only on their personal protective equipment (PPE) gear.

“As surgeons themselves, we were concerned about the safety of doctors, but also about the risk of missed diagnoses and the opportunities for treatment of patients. So our aim has been to produce an easy, inexpensive device that physicians can Will be allowed back. ” For their regular practice, reducing the risk to themselves and other staff, ”said Coulson, who works at Queen Elizabeth Hospital in Birham.

He and George co-founded their spin-out company Endoscope-Eye in 2012, which specializes in making endoscopic adapters for smartphones that allow physicians to perform complex imaging tasks.

Earlier this year, the couple won a £ 50,000 grant from Innovate UK to help develop the SNAP device as a government agency support for innovations designed to reduce the impact of COVID-19.

In tests, the device has been shown to dramatically reduce the diffusion of particles when the patient coughs, compared to either having no mask or an orifice. Reduction in particulate spread reduces the likelihood of COVID-19 being transferred to clinics.

Currently, the NHS is only able to perform around 10 percent of such procedures due to the risk of the spread of coronovirus drops around clinics, requiring deep cleaning between appointments. Now an initial batch of 30,000 devices will be dispatched in the coming weeks, with 5,000 being free to NHS ENT clinics across the country.

Mark Prince, a 3D printing specialist at Aston University’s College of Engineering and Physical Sciences, was second to Endoscope-Eye earlier this year and led the design work.

Using an industrial-grade 3D printer borrowed from the university during the lockdown period, he produced about 2,000 prototype versions of the device from his home in Kidderminster in the West Midlands region of England.

Prince said, “It’s disrespectful for something that’s effectively such a simple idea, but each prototype must be produced in multiples so that they can be tested.”

“With something important, it has to be perfect. If it helps to bring the NHS back to a more normal service, even in this one specialty, it will all be worth it,” he said.

The final design received CE mark approval from the Medicines and Healthcare Products Regulation Agency (MHRA) and was then sent to Haverhill, Essex, based injection-molding specialists, form molds and tooling for construction before passing the finished SNAP products. DTR Medical in Swansea, Wales for medical sterilization.

Since then, the device has been interested in the US, Australia, Japan, the Netherlands and the Philippines.

Many hospitals have dramatically outnumbered the number of exhibitions they can perform. In normal times, approximately 500,000 procedures are performed every year in the NHS, usually to diagnose and treat diseases affecting the nose and throat, including cancer and severe infections.

The technique is also used in speech and language therapy, in which patients are often required to practice speaking with a tube inserted. It is hoped that the new protective device will help address scale-back in processes.

India, Maldives to support each other in the battle of COVID-19: PM Modi

The S&P BSE Sensex and NSE Nifty 50 indices fell for the third consecutive session on a broad-based sell-off on Monday. According...
Read more
Bollywood News

John Abraham is deadly in this Satyamev Jayate 2 poster. The film releases on Eid 2021

India, Maldives to support each other in the battle of COVID-19: PM Modi

The S&P BSE Sensex and NSE Nifty 50 indices fell for the third consecutive session on a broad-based sell-off on Monday. According...
Read more
Bollywood News

John Abraham is deadly in this Satyamev Jayate 2 poster. The film releases on Eid 2021