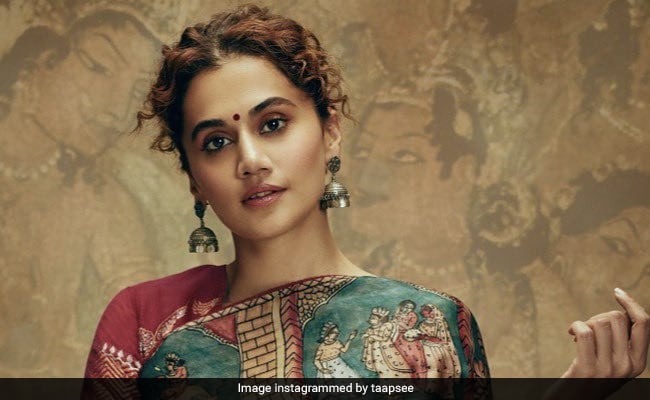 Apart from her acting, Bollywood actress Tapes pannu She has a lot of reputation on social media for speaking her mind. She never shies away from drawing attention to subjects that are otherwise considered hush-hush by most Bollywood stars. From expressing his political views to slapping a journalist who asked him to speak in a particular language during a media interaction, Taapsee Pannu has spoken up and out. On International Democracy Day, the actress shared videos in Hindi as well as Punjabi, where she addressed various social issues and emphasized the role of dialogue in saving democracy. She expressed the essence of the video she had heard in a single sentence – “Because it is not anti-national when you raise questions that ask better questions for your country. The reason for this is that you give your country and countrymen Loves beyond all apprehension and feels it has potential. Still untapped. “

Sharing animated videos that were supported Tapes pannuShe voiced, she wrote in her Instagram profile: “For the world’s largest democracy, let us protect our ‘rights’ and perform ‘duties’.”

The video began with the Taapsee voiceover, where he talked about blind faith, unemployment and false promises. he said, “Rakhi hai ek nai Bharat ki baniyad, Hong safari gar ho samawad. I am pure of science, and Ghushwasso is my pride, iska New India me honge na berozgaar, Fir chunaao jate hi kyu badle sab yaar? (We have laid the foundation for a new India and if we keep communicating we will succeed. In search of science, but it is sad that we are stuck in blind faith. There should have been no unemployment in the new India, then why? . Everyone changed gears as soon as the election was over).

The latter part of the video focuses on the Constitution of India and what it is for. He encouraged people to start afresh. Taapsee added to the video, “Samidwan says we are all one, then why are I thorn in religion? No one will sleep hungry, everyone will have a home. It is a noble dream if the heart of the mind See Alha jab in Jantar Mantra also, what can the anti-Arat say? Vasudhaiva Kutumb, you taught the world, then what are you doing? Rakhe hum assi baniyadf, woo safar. (The constitution says that we are all equal, then why are we divided on the basis of caste and religion? No one will sleep hungry and everyone will have a house – it’s a good idea but we have to erase fear from our hearts first. We taught the world that everyone is family, why can’t we follow the same? Let us be the one who starts new journeys and makes it successful with dialogues). “

When you ask a better question for your country, it is not anti-country because it is beyond all fear from your country and countrymen.
There is something to the world’s largest democracy #Samwad#internationalDayOfDemocracy
@kireetkhurana @climbmediapic.twitter.com/X4PRm49emp

An official said that there were 40 flats in the building and around 150 persons lived.Bhiwandi: The National Disaster Relief Force (NDRF) said...
Read more
India News

An official said that there were 40 flats in the building and around 150 persons lived.Bhiwandi: The National Disaster Relief Force (NDRF) said...
Read more
India News