Pakistan on Wednesday defeated Sri Lanka in the first Test at the Galle International Stadium to finish third in the World Test Championship table. Riding on Abdullah Shafiq’s unbeaten knock of 160, Pakistan chased down a record 342 runs in Galle. Pakistan increased their win percentage to 58.33 per cent, only ahead of South Africa (71.43%) and Australia (70%) now led by Babar Azam. On the other hand, Sri Lanka, who claimed third place after beating Australia in the second Test of the two-match series, have slipped to sixth place (48.15 win percentage).

Courtesy Pakistan’s victory, India improved one place to fourth (52.08%) and West Indies fifth (50%), ahead of the second and final Test between the two sides in Galle next week.

If Pakistan wins the second Test, then the gap between South Africa and Australia can be further bridged. 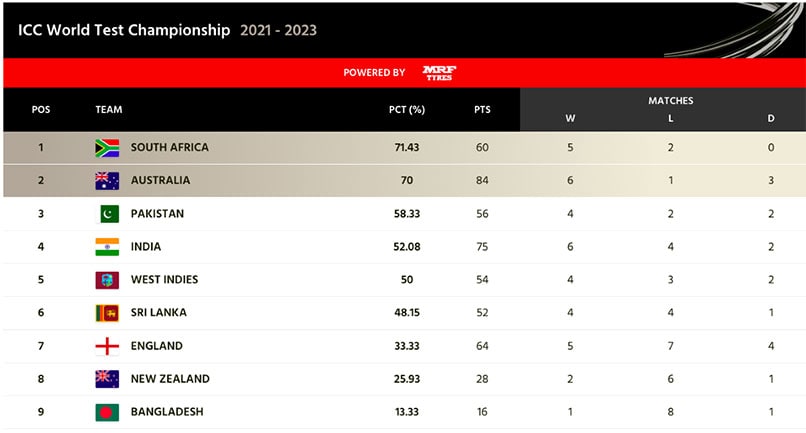 England, New Zealand and Bangladesh completed the bottom three with win percentages of 33.33, 25.93 and 13.33 respectively.

England will play three Tests at home against South Africa next month and will be looking to move up the table.

Since the appointment of Brendon McCullum as head coach, England have yet to lose a Test match (with four wins in as many matches).

In the first round of the World Test Championship, India and New Zealand finished in the top 2 places on the points table and they faced off with New Zealand coming out on top in the final in Southampton last year.

India vs South Africa, India Predicted XI: Will Rohit Sharma’s team continue with both Rishabh Pant and Dinesh Karthik in the playing XI?

Manchester City vs Manchester United, Premier League: When and Where to Watch Live Telecast, Live Streaming