Coronavirus: The origin of the coronavirus has become a hotly disputed issue.

The Chinese province that was the initial epicenter of the Covid-19 outbreak, months before Beijing informed international authorities of the emergence of a new coronavirus, has been used to test for infectious diseases, according to research by a cyber security company. Made significant purchases of equipment.

The province’s purchases of polymerase chain reaction, or PCR, testing equipment that allows scientists to amplify DNA samples to test for infectious disease or other genetic material shot up in 2019, with most of the increase in the year. Coming in the second half of the year, the Australian-American firm found Internet 2.0.

Hubei province is home to the large Chinese city of Wuhan where the first known cases of the virus were reported. The World Health Organization reported that its China Country Office was informed on December 31, 2019, that cases of pneumonia of unknown cause had been detected in the city.

On January 7, 2020, Chinese authorities identified a new type of coronavirus, which would be known as SARS-CoV-2 and would cause the disease, now known as Covid-19. Since then, it has spread to almost every corner of the world, and more than 230 million people have been infected and about 4.8 million people have died. 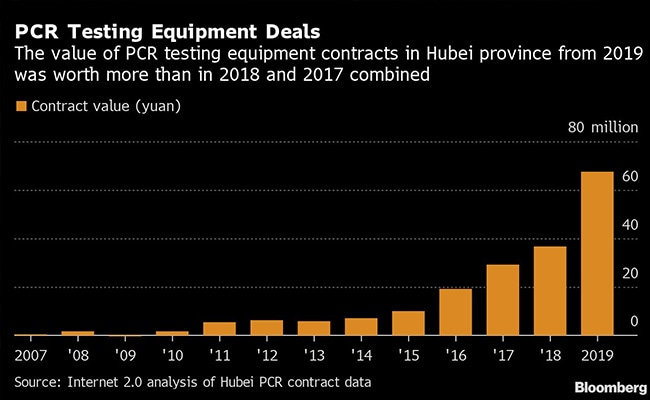 The demand for PCR and testing equipment increased in 2019.

Based on the research, Internet 2.0 “concludes with high confidence that China started the pandemic much earlier than the WHO was informed about COVID-19,” according to the report. The cyber security firm, which specializes in digital forensics and intelligence analysis, asked for further investigation.

But several medical experts said the Internet 2.0 report was not enough information to draw such conclusions. For one thing, the PCR test, which has been in widespread use for several decades, is growing in popularity as it becomes a standard method for testing pathogens, according to one expert. In addition, PCR equipment is widely used in laboratories to test for pathogens other than COVID-19, including in animals, and is commonly found in modern hospitals and laboratories.

China was also battling an outbreak of African swine fever across the country in 2019.

China’s foreign ministry disputed the findings. Responding to Bloomberg News, a spokesperson said the findings fall into the same category as other dubious claims about the origins of the coronavirus, including a “so-called paper” that described the volume of traffic near several hospitals in Wuhan. Analyzed and searched for keywords. “Cough” and “diarrhoea” before concluding that the outbreak began in early August 2019 in Wuhan.

“Virus detection capability is a serious scientific issue that must be addressed by scientists,” the spokesperson said. The spokesman said China’s State Council Information Office published a white paper on the country’s actions to combat COVID-19, with “a clear timeline and iron-clad facts” describing its efforts to fight the pandemic. , said the spokesperson.

“China’s anti-epidemic campaign is open to the world, the position is clear, the facts are clear at a glance, and withstood the test of time and history,” the spokesman said.

Dr. Amesh Adalja, a senior scholar at the Johns Hopkins Center for Health Security, said he did not know why purchases in Hubei province were particularly high at that time. But he said this was not so surprising as purchases of PCR equipment in general are increasing, even pre-Covid, as it has become the “method of choice for pathogen detection”.

Adalja, whose work focuses on emerging infectious disease and pandemic preparedness, said the data was not enough to influence conversations on the origins of Covid. “I don’t think it adds a plus or minus anything,” he said. “It is not enough.”

An Australian biochemist who has read the report and requested anonymity because he was not authorized to speak publicly on the matter said more data was needed to interpret the purchase numbers. The biochemist, who has a strong background in PCR and research applications and immunology, said the data spoke of a sudden, critical need for pathogen diagnostics equipment, but added that it only raises questions about how to test the equipment. what was being used for.

David Robinson, Internet 2.0’s co-CEO and lead researcher on the paper, said in an interview that the timing of some contracts, and the agencies behind the purchases, credits the idea that officials in Hubei province were in a position in late 2019. were investigating new human disease.

However, he said his firm’s findings were not a smoking gun.

According to a statement from other co-CEOs Robinson and Robert Potter, “This data does not support any original findings on COVID-19, but some of this data may in the future support the original finding.” “Nor does this report identify any specific point in time where a pandemic emerged. The fact that China has gone to great lengths to ensure conclusive evidence unfortunately makes us rely on third-party data points.” may have to.”

The origins of the coronavirus have become a hot topic, with the US and its allies accusing Beijing of resisting a more thorough investigation, including allegations that the virus escaped from the Wuhan Biosafety Laboratory where similar coronaviruses were detected. has studied. In August, US intelligence officials released a summary of the investigation into the cause of the outbreak, but said they had not reached a firm conclusion because China refused to cooperate. Chinese officials denied that they obstructed the investigation and strongly refuted the Wuhan lab leak theory. Top Chinese science officials have said the pathogen most likely originated in an animal, which transmitted it to humans through an intermediate host, which was also given the highest credence by the wider scientific community.

In an April article in Science, researchers concluded that mid-October to mid-November 2019 was the most plausible period in which the first case of a person contracting COVID-19 was reported in Hubei province.

Internet 2.0, which counts the Australian government among its customers, shared its data with government officials in the so-called “Five Eyes” countries, a group of intelligence-sharing countries in Australia, the US, Canada, the UK and New Zealand, the firm and According to other sources.

When asked about the report, representatives of those countries’ intelligence services declined to comment.

Robinson, a retired intelligence officer in the Australian Army, said the Internet 2.0 report is based on purchasing data that is publicly available on Chinese government websites. The data is regularly scraped by an aggregator website called Bolicenter.com.cn, and Internet 2.0 researchers searched for the term PCR in the database.

Robinson said that in total, they collected 1,716 purchase contracts from 2007 to the end of 2019, and then spent months scrutinizing and analyzing the data. A control sample was taken from China’s provinces and cities, and the top regions for PCR procurement were compared to Hubei to find out what was increasing across China. PCR-related buying remained relatively flat or slightly up or down in most other regions. However, according to the report, purchases in Beijing increased in 2019, which does not break out purchases in provinces outside Hubei by month.

In Hubei province, spending on PCR equipment began to trend upward in 2014. But the jump was particularly large in 2019, from 36.7 million yuan a year earlier to 67.36 million yuan. 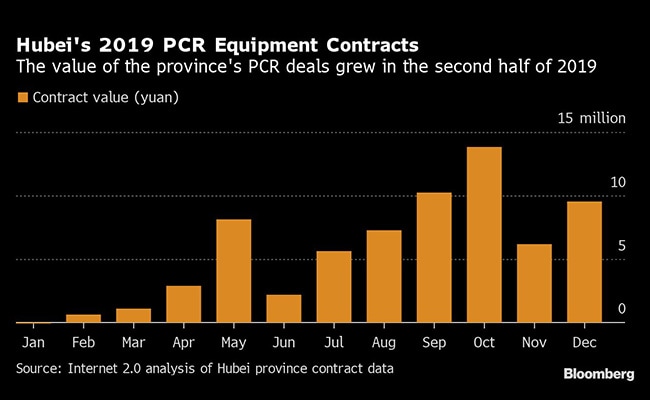 In Hubei province, spending on PCR equipment began to trend upward in 2014.

Robinson said the type of Chinese organizations that made large purchases of PCR equipment in 2019 has changed from primarily agricultural research and hospital use to large-scale disease prevention and control institutions compared to the previous year.

For example, in 2019, Wuhan University of Science and Technology in Hubei province was the largest buyer. According to the report, the university is affiliated with eight hospitals and has over 35 teaching practice bases including 22 general hospitals and 10 disease prevention and control centres.

Robinson highlighted three particular purchases in Hubei province, which he described as “out of trend” and suggested Chinese officials were dealing with a novel human pathogen reported earlier in 2019.

The first purchase occurred in May 2019, when the Chinese People’s Liberation Army Airborne Hospital purchased equipment related to PCR, the only contract from the PLA in the database, Robinson said.

The second occurred in September 2019, when the Wuhan Hongshan District Center for Disease Control and Prevention made two purchases of pathogen detection equipment for the upcoming Military World Games. The following month, more than 9,000 international athletes from more than 100 countries traveled to Wuhan and many of them later became ill with COVID-19-like symptoms, the Washington Post reported in June.

China later claimed that US military athletes may have brought the virus with them from Fort Detrick, Maryland, where the military conducts bioresearch, the Post said.

According to the report, the third “out of trend” purchase occurred in November 2019. The Wuhan Institute of Virology where proponents of the lab leak theory allege that the virus originated from PCR-related equipment purchased.

“These findings challenge existing assumptions about when the pandemic began and support further investigation,” the report said.

Related Topics:china coronaviruscoronavirus china
Up Next